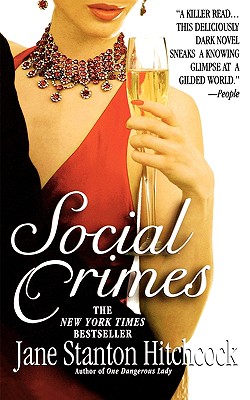 A witty, fast-paced ride up and down the social ladder with a determined woman wronged by a cheating husband who rights herself with a vengeance, now in mass market.

Murder was never my goal in life. I'm a very sentimental person at heart. I cry in old movies. I love animals and children. So if anyone had told me five years ago that I could have willfully and with malice aforethought killed a fellow human being, I would have said they were crazy. But life has surprises in store for all of us... Jo Slater is a grand dame of New York society; some say the grandest. But she is about to be dethroned.

Her wealthy husband of twenty years dies under strange circumstances and leaves his entire fortune to a mysterious French countess. Sliding down the social ladder faster than you can say "Versace," Jo discovers she has been the victim of a plot and decides to get some very sweet revenge. Your days are numbered, Countess!

Jane Stanton Hitchcock has written three previous novels: the bestselling Social Crimes, The Witches' Hammer, and Trick of the Eye, which was nominated for both the Edgar Award and the Hammett Prize as the Best First Novel of the Year. She lives in New York and Washington, D.C.
Loading...
or support indie stores by buying on