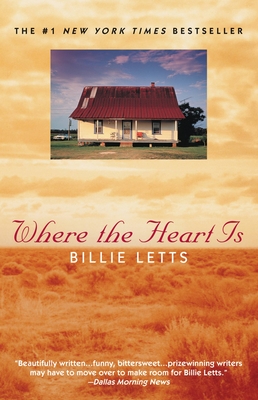 Where the Heart Is

Talk about unlucky sevens. An hour ago, seventeen-year-old, seven months pregnant Novalee Nation was heading for California with her boyfriend. Now she finds herself stranded at a Wal-Mart in Sequoyah, Oklahoma, with just $7.77 in change. But Novalee is about to discover hidden treasures in this small Southwest town--a group of down-to-earth, deeply caring people willing to help a homeless, jobless girl living secretly in a Wal-Mart. From Bible-thumping blue-haired Sister Thelma Husband to eccentric librarian Forney Hull who loves Novalee more than she loves herself, they are about to take her--and you, too--on a moving, funny, and unforgettable journey to . . . Where the Heart Is.

Billie Letts was the New York Times bestselling and award-winning author of Where the Heart Is, The Honk and Holler Opening Soon, Shoot the Moon, and Made in the U.S.A. A native Oklahoman, she died in 2014.
Loading...
or support indie stores by buying on
(This book is on backorder)