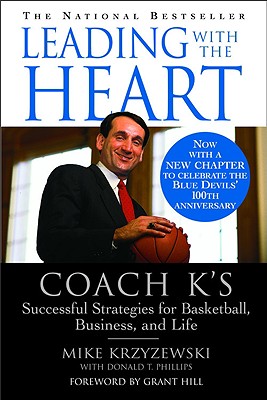 Leading with the Heart

In this informative and inspirational book, Coach K, Duke University's head basketball coach, tells readers how he coaxes peak performances from his team, relying on lessons he learned as a captain in the U.S. Army.

Duke University's head basketball coach Mike Krzyzewski has proved himself a leader both on and off the court. He's led the Duke Blue Devils to five straight Final Four appearances, culminating in back-to-back championships in 1991 and '92. He has received five National Coach of the Year Awards—and many of the players he coached in college have gone on to NBA stardom.

From sportsmanship to respect, Leading with the Heart is a genuine gift from a coach who knows how to lead with heart.

Mike KrzyzewskiI has been the basketball coach of the Duke Blue Devils for thirty years, winning three NCAA championships and twelve national Coach of the Year awards. He is revered and respected by sports fans and business leaders everywhere. Coach K lives with his family in Durham, North Carolina.
Loading...
or support indie stores by buying on