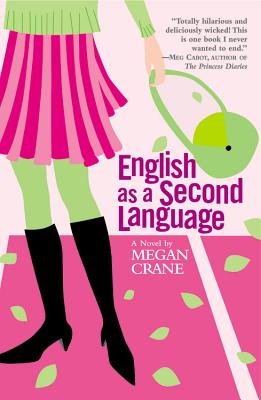 English as a Second Language (Paperback)

Alexandra Brennan is fed up with her dead end New York City job-and even more fed up of running into her smug ex-boyfriend. So when he crosses the line by telling her that she'll never get into graduate school in the United Kingdom, that's precisely what she does.

Armed with imported cigarettes and extra strength coffee, Alex leaves home and crosses the Atlantic to face all that Great Britain and grad school have to offer, including ill-considered romantic interludes, a red-headed nemesis with intellectual pretensions and ulterior motives, a preponderance of eighties music, and more books than she can possibly read in a year. What she discovers, however, is that instead of running away from home - she may have actually found it.

With a cheeky sense of humor and terrific cast of characters, English as a Second Language is a funny and irreverent novel about a young woman's misadventures on the path to adulthood.

Megan Crane grew up in New Jersey, graduated from Vassar, and got her MA and PhD in literature from the University of York in England. She currently lives in Los Angeles. Visit her website at www.megancrane.com.
or support indie stores by buying on
Copyright © 2020 American Booksellers Association