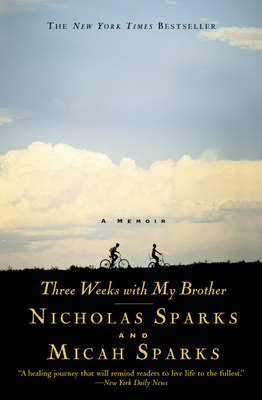 In this New York Times bestseller, follow the author of The Notebook as he travels the world with his brother learning about faith, loss, connection, and hope.

As moving as his bestselling works of fiction, Nicholas Sparks's unique memoir, written with his brother, chronicles the life-affirming journey of two brothers bound by memories, both humorous and tragic. In January 2003, Nicholas Sparks and his brother, Micah, set off on a three-week trip around the globe. It was to mark a milestone in their lives, for at thirty-seven and thirty-eight respectively, they were now the only surviving members of their family.

Against the backdrop of the wonders of the world and often overtaken by their feelings, daredevil Micah and the more serious, introspective Nicholas recalled their rambunctious childhood adventures and the tragedies that tested their faith. And in the process, they discovered startling truths about loss, love, and hope.

Narrated with irrepressible humor and rare candor, and including personal photos, Three Weeks with My Brother reminds us to embrace life with all its uncertainties . . . and most of all, to cherish the joyful times, both small and momentous, and the wonderful people who make them possible.

Praise For Three Weeks with My Brother…

"Refreshingly honest and perceptive . . . Weaving in vignettes of
tenderness and loss with travelogue-like observations . . . the
brothers cover the crucial moments in a life full of familial love
and tragedy."—Publishers Weekly

"A deeply personal story of family and familial bonds . . . an entertaining blend of travelogue and memoir, but most of all it's the
story of two brothers' relationship with each other."—Greenville News (SC)

"Poignant, funny, and ultimately life-affirming . . . Fans of
Nicholas Sparks's novels may be surprised to learn that the
author's life has known the same emotional turmoil he brings so
vividly to life in his fiction."—BookPage

"An incredible story of two brothers who fit each other like two
pieces of a puzzle . . . a heartfelt tale of two brothers and a family
who conquered the world in their own special way . . . The finale
will make everyone want to beam a thousand-watt smile right
along with them."—MyShelf.com

"This is a rare opportunity for readers to get to know a favorite
author as Nicholas reveals the inspirations for his fiction. A mustread for Sparks fans as well as a treat for those who want to find
out what makes a family strong."—Booklist

"Compelling . . . unprecedented . . . This unforgettable memoir
will touch your heart and your spirit, and will make you look at
Sparks's writings, and your own life, with a fresh perspective."—Large Print Reviews