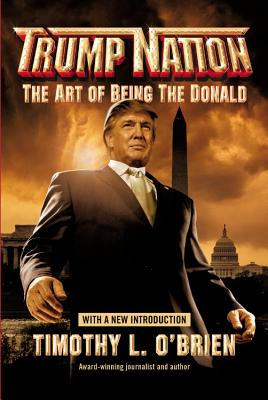 The Art of Being The Donald

Available for the first time in a decade-the book that launched a $5 billion lawsuit--with a new introduction by the author in which O'Brien reflects on the recent wave of TrumpMania.

This entertaining look inside the world of Donald Trump is chock full of rip-roaring anecdotes, jaw-dropping quotes, and rigorous research into the business deals, political antics, curious relationships, and complex background of the leading Republican presidential candidate.

The world of Donald Trump is seemingly full of glitz and glamour. Yet despite glaring cracks in the shimmering fa?àövüade, the myth of the man has remained impenetrable to a fascinated public. Through interviews with Trump's closest friends-and with Trump himself-award-winning journalist and author Timothy L. O'Brien presents a look inside the life of one of the world's most famous businessmen, pulling back the curtain on the wizard of hype known as The Donald. Prepare to enter...

This "myth-busting biography" (Kirkus Reviews) is the only argument you need against making America a TrumpNation, providing all the necessary details to "separate Trump the reality from Trump the reality show" (USA Today.)

Praise For TrumpNation: The Art of Being The Donald…

"Never having met O'Brien...I don't presume to know whether he's having fun yet. But I doubt that I'm alone among members of the Fourth Estate in experiencing a twinge of envy." —New Yorker

"At the start of his career in hype and carnival barking, the press fawned
over Trump; he made great copy. It's refreshing that reality has finally
crept into the coverage."

"An engrossing romp...hilarious...peppered with wit and irony...the
perfect base to Trump's acidic persona...an instructive tongue-in-cheek
primer for would-be Trumps."

"Sarcastic at times, hilarious and irreverent at others, the book demystifies the star of The Apprentice as the poor man's rich man and portrays him as a potty-mouthed P. T. Barnum with a bad comb-over." —Palm Beach Post

"Somewhere there is another country, far beyond the pale, known as Bad
Taste, and Trump has devoted his life to racing through it and staking as
many private claims as possible, pausing only to yodel back to the
homeland songs of himself."

Timothy L. O'Brien is an award-winning author and journalist with more than 20 years of experience at leading media enterprises, including Bloomberg LP, The New York Times, Wall Street Journal and HuffPost.

He's currently the executive editor of Bloomberg LP's two premier public policy, politics and business commentary platforms: View and Gadfly. O'Brien edited a series on wounded war veterans that won a Pulitzer Prize in 2012. He's also the recipient of a 1999 Loeb Award for Distinguished Business and Financial Journalism and is the author of three books. He was a reporter and a senior editor at The New York Times, where he oversaw the Sunday Business section and helped lead a team of reporters that was a Pulitzer Prize finalist in Public Service for a series of articles about the 2008 financial crisis. The same series received a Loeb Award in 2009.

O'Brien is the author of two non-fiction books -- TrumpNation: The Art of Being the Donald and Bad Bet: The Inside Story of the Glamour, Glitz and Danger of America's Gambling Industry. He is also the author of an historical novel, The Lincoln Conspiracy. Donald Trump sued O'Brien for libel in 2006. Trump lost.
Loading...
or
Not Currently Available for Direct Purchase