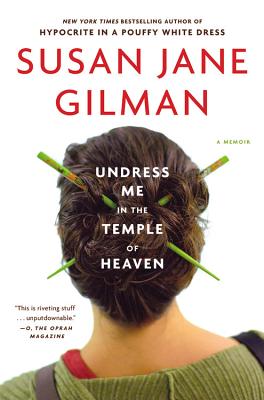 Undress Me in the Temple of Heaven (Paperback)

They were young, brilliant, and bold. They set out to conquer the world. But the world had other plans for them.

In 1986, fresh out of college, Gilman and her friend Claire yearned to do something daring and original that did not involve getting a job. Inspired by a place mat at the International House of Pancakes, they decided to embark on an ambitious trip around the globe, starting in the People's Republic of China. At that point, China had been open to independent travelers for roughly ten minutes.

Armed only with the collected works of Nietzsche, an astrological love guide, and an arsenal of bravado, the two friends plunged into the dusty streets of Shanghai. Unsurprisingly, they quickly found themselves in over their heads. As they ventured off the map deep into Chinese territory, they were stripped of everything familiar and forced to confront their limitations amid culture shock and government surveillance. What began as a journey full of humor, eroticism, and enlightenment grew increasingly sinister-becoming a real-life international thriller that transformed them forever.

Undress Me in the Temple of Heaven is a flat-out page-turner, an astonishing true story of hubris and redemption told with Gilman's trademark compassion, lyricism, and wit.

Susan Jane Gilman is the author of Hypocrite in a Pouffy White Dressand Kiss My Tiara. She has an MFA in Creative Writing from the University of Michigan, and has written commentary for The New York Times, The Los Angeles Times, and Ms. magazine, among others. Her fiction and essays have received several literary awards. Though she lives in Geneva, Switzerland, she remains, eternally, a child of New York.

Praise For Undress Me in the Temple of Heaven…

On UNDRESS ME IN THE TEMPLE OF HEAVEN:
"[A] standout travel memoir...Gilman's descriptions of their trials and tribulations crackle with wit."—Booklist

"[An] ambitious and intimate coming-of-age memoir."—Kirkus

"With her trademark intelligent, irreverent voice Gilman takes us on a journey that feels terrifyingly real, immediate and life-threatening. The woman is no less than a godsend to a reading world that has become too used to lies, half-truth and spin."—Alexandra Fuller
or support indie stores by buying on
(This book is on backorder)
Copyright © 2020 American Booksellers Association