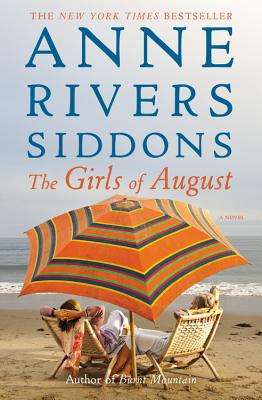 The Girls of August

Anne Rivers Siddons's New York Times bestselling novel about four friends whose lives are forever changed by the events of one summer.

For fifteen years, four "girls of August" would gather together to spend a week at the beach, until tragedy interrupts their ritual. Now they reunite for a startling week of discoveries.

The ritual began when they were in their twenties and their husbands were in medical school, and became a mainstay of every summer thereafter. Their only criteria was oceanfront and isolation, their only desire to strengthen their far-flung friendships. They called themselves the Girls of August. But when one of the Girls dies tragically, the group slowly drifts apart and their vacations together are brought to a halt.

Years later, a new marriage reunites them and they decide to come together once again on a remote barrier island off the South Carolina coast. There, far from civilization, the women uncover secrets that will change them in ways they never expected.

Praise For The Girls of August…

Bravura writing...This is Siddons's best, maybe the book she was born to write."—Stephen King (on Off Season)

"Anne Rivers Siddons's body of work is one of the most impressive in contemporary fiction. And, in her beautifully crafted and dazzling new novel OFF SEASON, Ms. Siddons delivers the goods more powerfully than ever. All her books are terrific, but this one is the best yet."—Pat Conroy

"The lyrical beauty of Siddons's writing shines...an elegant portrait of love, loss, longing; memories and mystery line the path to self-discovery in OFF SEASON....Siddons's fans will savor the story long after the last page has turned."—Charlotte Observer

"Siddons masterfully portrays growing up in a small town outside Atlanta...Even as they age, Siddons' characters focus on their sensations and needs and aspirations, but that single-mindedness coaxes readers to side with her central character. Anyone who appreciates the instant gratification of romance novels - 'Burnt Mountain' seems designed for a few days of beach reading - will be quickly taken in by the quiet and beautiful tomboy...When Thayer Wentworth figures out young that life's nastiest snarls may not all be loosened and smoothed and retied in neat bows, we fret with her. And when everything inevitably does start to work out, we are as relieved as she is."—The Associated Press (on BURNT MOUNTAIN)

"Siddons mixes in a touch of the supernatural to bring the novel to an exciting climax, but what's most appealing here is the layered family drama and the lush world Thayer inhabits...A master storyteller with a remarkable track record, bestselling Siddons returns to her signature Southern setting in her newest blend of emotional realism and a sliver of magic."—Booklist (on BURNT MOUNTAIN)

The Girls of August is Anne Rivers Siddons's 19th novel. Her previous bestselling novels include Burnt Mountain, Off Season, Sweetwater Creek, Islands, Nora Nora, Low Country, Up Island, Fault Lines, Downtown, Hill Towns, Colony, Outer Banks, King's Oak, Peachtree Road, Homeplace, Fox's Earth, The House Next Door, and Heartbreak Hotel. She is also the author of a work of nonfiction, John Chancellor Makes Me Cry. She and her husband, Heyward, split their time between their home in Charleston, SC and Brooklin, ME. For more information, visit www.anneriverssiddons.net.
Loading...
or
Not Currently Available for Direct Purchase