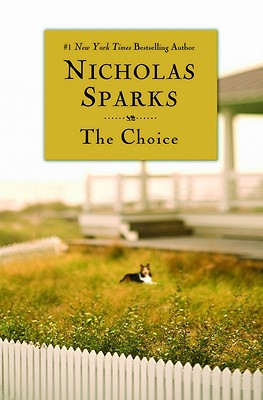 Opposites attract in this moving #1 New York Times bestseller of love lost and found between a medical student and the man who captures her heart.

Travis Parker has everything a man could want: a good job, loyal friends, even a waterfront home in small-town North Carolina. In full pursuit of the good life—boating, swimming, and regular barbecues with his good-natured buddies—he holds the vague conviction that a serious relationship with a woman would only cramp his style. That is, until Gabby Holland moves in next door.

Despite his attempts to be neighborly, the appealing redhead seems to have a chip on her shoulder about him . . . and the presence of her longtime boyfriend doesn’t help. Despite himself, Travis can’t stop trying to ingratiate himself with his new neighbor, and his persistent efforts lead them both to the doorstep of a journey that neither could have foreseen.

Spanning the eventful years of young love, marriage, and family, The Choice ultimately confronts us with the most heart-wrenching question of all: how far would you go to keep the hope of love alive?

Nicholas Sparks is the author of twenty-three books, all of which have been New York Times bestsellers. His books have been published across more than fifty languages with over 150 million copies sold worldwide, and eleven have been adapted into films. He is also the founder of the Nicholas Sparks Foundation, a nonprofit committed to improving cultural and international understanding through global education experiences. He lives in North Carolina.
Loading...
or support indie stores by buying on