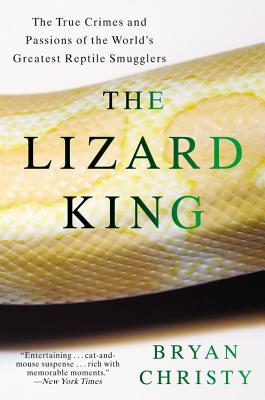 The True Crimes and Passions of the World's Greatest Reptile Smugglers

Imagine The Sopranos, with snakes! The Lizard King is a fascinating account of a father and son family business suspected of smuggling reptiles, and the federal agent who tried to take them down.


When Bryan Christy began to investigate the world of reptile smuggling, he had no idea what he would be in for. In the course of his research, he was bitten between the eyes by a blood python, chased by a mother alligator, and sprayed by a bird-eating tarantula. But perhaps more dangerous was coming face to face with Michael J. Van Nostrand, owner of Strictly Reptiles, a thriving family business in Hollywood, Florida. Van Nostrand imports as many as 300,000 iguanas each year (over half the total of America's most popular imported reptile), as well as hundreds of thousands of snakes, lizards, frogs, spiders, and scorpions.

Van Nostrand was suspected of being a reptile smuggler by Special Agent Chip Bepler of the U.S. Fish and Wildlife Service, who devoted years of his life in an obsessive quest to expose The Lizard King's cold-blooded crimes. How this cat-and-mouse game ended is engrossing and surprising.


Praise For The Lizard King: The True Crimes and Passions of the World's Greatest Reptile Smugglers…

"Bryan Christy has fulfilled his contract as a writer on all counts; in this impassioned, noirish, funny, ruthlessly researched masterpiece he has, with a poet's soul, given vioce to the voiceless, shown us a world we could not otherwise explore on our own, and borne witness to the careless mentality of our collecting, consuming culture. This is The Orchid Thief, with fangs."
-Alexandra Fuller, Author of 'Don't Let's Go to the Dongs Tonight'

"Who knew the world of reptile smuggling was as high stakes and character rich as an Elmore Leonard novel? Christy dives headlong into this subterranean world where a white python can fetch $100,000 ... The tactics of reptile smugglers recall those of drug criminals-falsifying documents, laundering funds. [THE LIZARD KING] emphasizes our enduring fascination with the cold-blooded. FOUR BUNNIES!"
-Playboy

"Who knew the world of reptile smuggling was so poisonous? ... Set in the mid-1990s, [The Lizard King] is reminiscent of the film version of Frank W. Abagnale's Catch Me if You Can: the determined lawman, the flamboyant scofflaw, the eventual showdown. Christy takes us deep inside the world of the smuggler... An exciting story of smugglers, lawmen, corrupt government officials, organized crime, and slithery beasts."
-Booklist

"Riveting... [The Lizard King] captures in vibrant prose the dynamic personalities and habits of its human and reptilian subjects."
-Kirkus

"THE LIZARD KING is a wild, woolly, finny, feathery and scaly account of animal smuggling on a grand scale, in a weird world so expansive that a few hundred stray snakes and turtles amount to peanuts.. . . Mr. Christy's entertaining book is about the crooks, swashbucklers and drug kingpins who constitute the underbelly of the reptile-dealing world . . . [The Lizard King] has a tangle of smugglers, agents, breeders and highly colorful minor players (like the tiger-purchasing Miami gangster who sounds like the prototype for "Scarface") with stories to tell . . . By the time THE LIZARD KING has escalated to describing the bear-gallbladder trade, it is rich with memorable moments."
-New York Times

Bryan Christy earned a bachelor's degree from Pennsylvania State Univeristy, a law degree from the University of Michigan, and a Fullbright Scholarship to Tokyo University. A native of New Jersey, his first job was as a mortician's apprentice in his family's funeral home; later, he worked as a lawyer in Washington, D.C. In researching this book he was bitten between the eyes by a blood python, chased by a mother allegator, sprayed by a bird-eating tarantula, and ejaculated on by a Bengal Tiger. A freelance writer with a taste for adventure, he has worked for Playboy and National Geographic. He can be reached at bryanchristy.com, or via thelizardkingbook.com/
Loading...
or
Not Currently Available for Direct Purchase