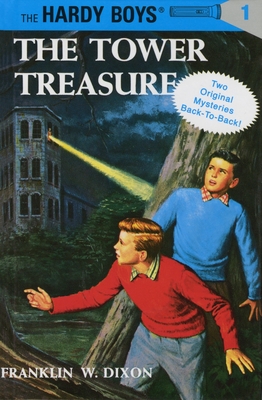 Together in this one book are two of the Hardy Boys’ oldest mysteries that began the classic mystery series of the sleuthing siblings.

In The Tower Treasure, the Hardy boys' summer is ruined by a red-haired robber striking all over town. No robbery is more devastating than of Tower Mansion, home to one of the wealthiest families around. To prove the mansion’s caretaker is innocent, the Hardy boys will have to solve the mystery of the stolen jewels before time runs out.

In The House on the Cliff, Frank and Joe are asked to help out their famous private detective father on his latest drug smuggling case, which sends them to an old house on a cliff to serve as lookouts. But when cries for help lure the boys inside the house, they realize they could be in more danger than they thought.

Franklin W. Dixon is a pen name used by a variety of authors writing for the classic series, The Hardy Boys. The first and most well-known "Franklin W. Dixon" was Leslie McFarlane, a Canadian author who contributed 19 of the first 25 books in the series. Other writers who have adopted the pseudonym include Christopher Lampton, John Button, Amy McFarlane, and Harriet Stratemeyer Adams.
Loading...
or support indie stores by buying on
(This book is on backorder)