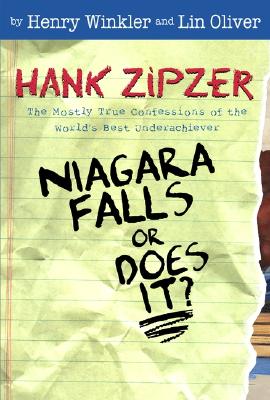 Niagara Falls, or Does It?

For Hank, fourth grade does not start out on the right foot. First of all, he gets called to the principal's office on the very first day of school. Then the first assignment his teacher gives him is to write five paragraphs on "What You Did This Summer." Hank is terrified-writing one good sentence is hard for him, so how in the world is he going to write five whole paragraphs? Hank comes up with a plan: instead of writing what he did on vacation, he'll show what he did. But when Hank's "living essay" becomes a living disaster, he finds himself in detention. Strangely enough, however, detention ends up becoming a turning point in his life.

Henry Winkler is an acomplished actor, producer and director. In 2003, Henry added author to his list of acheivements as he co-authored a series of children's books. Inspired by the true life experiences of Henry Winkler, whose undiagnosed dyslexia made him a classic childhood underachiever, the Hank Zipzer series is about the high-spirited and funny adventures of a boy with learning differences. Henry is married to Stacey Weitzman and they have three children.

Lin Oliver is a writer and producer of movies, books, and television series for children and families. She has created over one hundred episodes of television, four movies, and seven books. She lives in Los Angeles with her husband, Alan. They have three sons named Theo, Ollie, and Cole, one fluffy dog named Annie, and no iguanas.
Loading...
or support indie stores by buying on
(This book is on backorder)