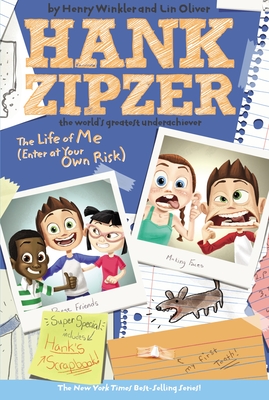 Enter at Your Own Risk (Hank Zipzer #14)

When Ms. Adolf hurts her back in a tango contest and goes on longterm leave, Mr. Rock (the music teacher) is called in as the sub. Hank is psyched . . . until Mr. Rock suggests that Hank attend an after-school reading program, which means he'll miss tae kwon do. But when Hank gets a crush on a girl in the reading program, and when Mr. Rock says that instead of writing his autobiography (a class assignment), Hank can present his life in scrapbook form, well . . . life's looking good. Then Hank finds out that his crush is actually the cousin of his nemesis, McKelty!

Readers will love Hank's newest adventure, plus they will adore reading Hank's scrapbook, which includes black-and-white photos of his school and neighborhood, newspaper clippings, memorabilia, and more!