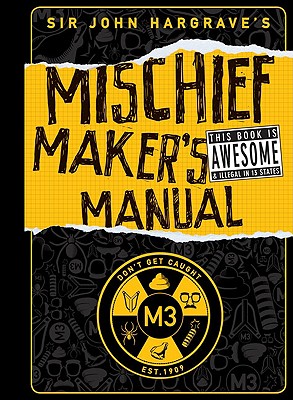 This is the definitive guide to pranking and mayhem. Written in the style of a training manual, but with hilarious illustrations, this book is broken up into five sections. The “Basics” shows kids how to find a pranking partner and how to pull simple pranks like making crank calls. “Prank Moves” explains how to pull pranks at places like home, school, or camp. “Do-It-Yourself” demonstrates things like putting a real worm inside an ice cube. “Experts Only” covers such advanced pranks as how to fake an alien landing. And “Recipes” gives step-by-step instructions on how to bake tuna cookies.

Sir John Hargrave, the “King of Dot-Comedy,” is the editor in chief of ZUG, the world’s oldest humor website. His comedy work has been featured in The New York Times, USA Today, Entertainment Weekly, The Boston Globe, and BusinessWeek. He has appeared on Comedy Central, The Tonight Show with Jay Leno, MSNBC, Tech-TV, and the BBC. He is a frequent speaker at technology conferences and wacky morning radio shows across the nation.
or
Not Currently Available for Direct Purchase
Copyright © 2020 American Booksellers Association