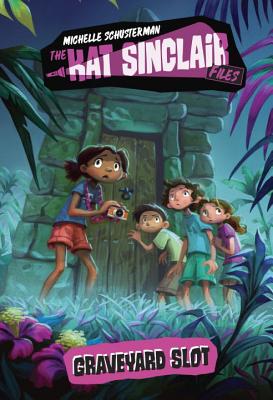 After a couple months at home dealing with her mother's upcoming wedding and trying on itchy bridesmaid dresses, Kat is more than happy to head off on another ghost-hunting and ghostbusting adventure with her dad—especially since the cast and crew of Passport to Paranormal are headed to Brazil and Argentina, and her new friends Jamie and Haley will be joining them. But the ghosts in South America are just as spooky and unpredictable as the ghosts they encountered in Europe, and once again Kat finds herself involved in some mysteries that she might not be able to unravel.

As a former expat and travel writer, Michelle Schusterman has blogged her way through ancient graveyards in Scotland, fortresses in Korea, and deserted beaches in Brazil. She once played a rousing game of cards with a Prohibition-era ghost in Seattle--and lost. (In her defense, it's impossible to read a ghost's poker face.) Michelle is the author of the I HEART BAND series and currently lives in New York City.
Loading...
or
Not Currently Available for Direct Purchase