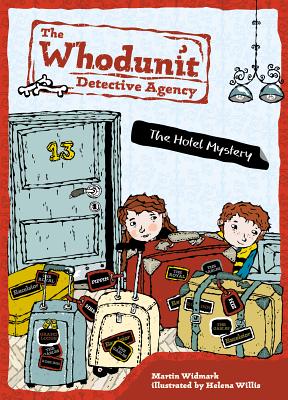 It is Christmas Eve, and the grand Braeburn family has come to stay in the luxury suite of Valleby’s hotel. With them, they have brought their extremely valuable dog. The hotel manager promises the family that he’ll take great care of their dog—but before they know it, the dog has gone missing without a trace! Jerry and Maya, the local young detectives, are brought in to help sniff out the missing hound. All the evidence suggests that one of the hotel staff had a hand in the case, but who could it be?

Martin Widmark was born in 1961 in Sweden and today lives in Stockholm with his family. He has worked as a middle school instructor and a Swedish teacher for immigrants, but he is now a full-time children's book author. Over his career, he has also written several text books. He is fascinated by life's little oddities and anything unique, from food and music to languages and people.

Widmark is considered a literary giant of contemporary children's fiction in Sweden. Both his Nelly Rapp and Lasse Majas (translated to Jerry Maya) series are consistently on the best seller lists and have received critical acclaim. His books have been translated into more than 20 languages.
or
Not Currently Available for Direct Purchase
Copyright © 2020 American Booksellers Association