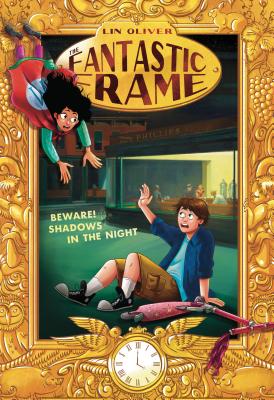 Beware! Shadows in the Night #3 (The Fantastic Frame #3)

Fast-paced adventure and full-color art in the style of Edward Hopper's Nighthawks make this third book a thrilling addition to the Fantastic Frame series!

When Tiger and Luna get sucked into the fantastic frame this time, their destination is the diner depicted in Edward Hopper's famous painting Nighthawks. They explore the streets of New York in 1942 and ride the subway through the dark underground tunnels. It's another art adventure for Tiger and Luna, and as always, they must find their way back to the real world before it's too late—or remain stuck in the painting forever.

Lin Oliver is the New York Times Best-Selling author of more than thirty books for young readers. She is also a film and television producer, having created shows for Nickelodeon, PBS, Disney Channel, and Fox. The cofounder and executive director of the Society of Children's Book Writers and Illustrators, she loves to hang out with children's book creators. Lin lives in Los Angeles, in the shadow of the Hollywood sign, but when she travels, she visits the great paintings of the world and imagines what it would be like to be inside the painting—so you might say she carries her own fantastic frame with her!

Samantha Kallis is a Los Angeles-based illustrator and visual development artist. Since graduating from Art Center College of Design in Pasadena, California, in 2010, her work has been featured in television, film, publishing, and galleries throughout the world. Samantha can be found most days on the porch of her periwinkle-blue Victorian cottage, where she lives with her husband and their two cats. More of her work can be seen on her website, www.samkallis.com
Loading...
or
Not Currently Available for Direct Purchase