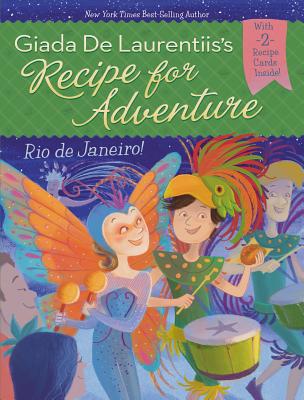 Alfie and Emilia’s adventures continue in the deliciously fun chapter-book series from Emmy Award–winning celebrity chef Giada De Laurentiis!
When Zia Donatella comes to live with the Bertolizzi family, little do Alfie and his older sister Emilia know what's in store for them. Zia Donatella is determined to show the kids how a home-cooked meal is better than even the best take-out pizza or burrito. And when Zia's plan actually transports Alfie and Emilia to famous food cities around the world, they learn first-hand how food cannot only take you places, but can bring you home again.

In the fifth book in the series, Zia's secret ingredient takes Alfie and Emilia to a city famous not only for its food, but also for its carnivals, music, and beaches - Rio de Janeiro! There they meet Miguel Costa, who persuades Alfie and Emilia to take part in the children's parade at Carnival. Once again the siblings get caught up in an adventure that introduces them to the sights, sounds, and tastes of the one the world's most incredible cities - all while trying to find their way home.

Giada De Laurentiis was born in Rome and grew up in a big Italian family. They spent a lot of time together in the kitchen, which is where Giada discovered her love of cooking! Later, she honed her skills at Le Cordon Bleu, a very cool cooking school in Paris, France. Many puff pastries and a graduation later, Giada began working in a fab restaurant called Spago in Los Angeles. Shortly after, she founded her very own catering company. She is now the Emmy Award-winning star of Food Network's Every Day Italian, Giada's Weekend Getaways, Giada in Paradise, and Giada at Home, as well as the author of seven cookbooks. She lives with her husband, Todd, and daughter, Jade, in a cozy house in Los Angeles. Giada loves the colors "pesto-green" and "eggplant-purple," and Nutella pancakes are her favorite treat to share with Jade.
Loading...
or
Not Currently Available for Direct Purchase