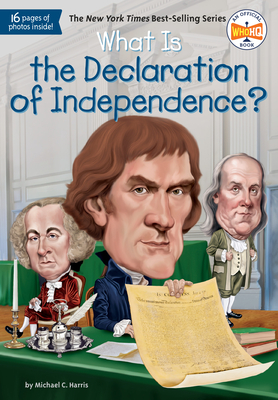 What Is the Declaration of Independence? (What Was?)

Step back in time to the birth of the United States of America and meet the real-life rebels who made this country free!

On a hot summer day near Philadelphia in 1776, Thomas Jefferson sat at his desk and wrote furiously until early the next morning. He was drafting the Declaration of Independence, a document that would sever this country's ties with Britain and announce a new nation—The United States of America. Colonists were willing to risk their lives for freedom, and the Declaration of Independence made that official. Discover the true story of one of the most radical and uplifting documents in history and follow the action that fueled the Revolutionary War.

Michael C. Harris is a freelance writer and college writing instructor based in Evanton, Illinois, where he lives with his wife, two soccer-loving sons, a dwarf hamster, a gecko, and a really weird cat. He has written a number of books for kids—including Cool Science titles about artificial intelligence, weird diseases, and spare body parts for humans.
Loading...
or support indie stores by buying on