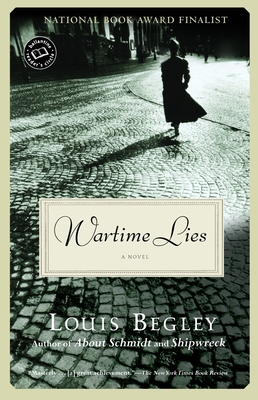 "Extraordinary...Rich in irony and regret...[the] people and settings are vividly realized and his prose [is] compelling in its simplicity."
THE WALL STREET JOURNAL
As the world slips into the throes of war in 1939, young Maciek's once closetted existence outside Warsaw is no more. When Warsaw falls, Maciek escapes with his aunt Tania. Together they endure the war, running, hiding, changing their names, forging documents to secure their temporary lives—as the insistent drum of the Nazi march moves ever closer to them and to their secret wartime lies.

Louis Begley’s novels include Kill and Be Killed; Killer, Come Hither; Memories of a Marriage; Schmidt Steps Back; Matters of Honor; Shipwreck; Schmidt Delivered; Mistler’s Exit; About Schmidt; As Max Saw It; The Man Who Was Late; and Wartime Lies, which won the PEN/Hemingway Award and the Irish Times/Aer Lingus International Fiction Prize. His work has been translated into fourteen languages. He is a member of the American Academy of Arts and Letters.
Loading...
or
Not Currently Available for Direct Purchase