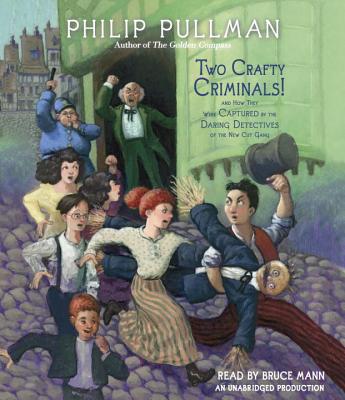 Benny Kaminsky and Thunderbolt Dobney lead a rag-tag gang of neighborhood rowdies. Their territory is the New Cut on London's South Bank a place bristling with swindlers, bookies, pickpockets, and the occasional policeman. And their aim is to solve crimes.
When counterfeit coins start showing up in their neighborhood, Thunderbolt fears his own father may be behind the crime. But his friends devise a way to trap the real culprit. Then the gang takes on the case of some stolen silver. They have just two clues a blob of wax, and an unusually long match. But even this slippery thief is unmasked by the determined kids of the New Cut.
Filled with silly sleuthing, improbable disguises, crazy ruses, and merry mayhem, these stories are action-packed romps from one of the best storytellers ever Philip Pullman.


Praise For Two Crafty Criminals!: And How They Were Captured by the Daring Detectives of the New Cut Gang…

Philip Pullman is a master storyteller and winner of the prestigious Astrid Lindgren Memorial Award in honor of his body of work. He is the author of the bestselling Sally Lockhart mysteries and the internationally renowned His Dark Materials: "The Golden Compass," winner of the Carnegie Medal; "The Subtle Knife," winner of a "Parents Choice" Gold Award; "The Amber Spyglass," " "the first children s book to win the Whitbread Book of the Year Award; "Lyra s Oxford"; and "Once Upon a Time in the North.""
Loading...
or
Not Currently Available for Direct Purchase