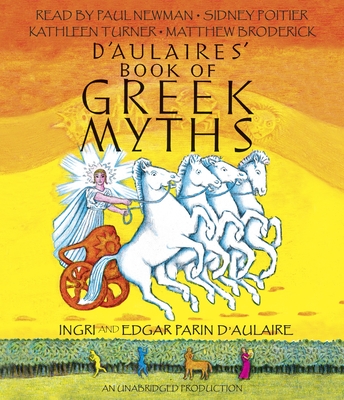 Here are the immortals of Olympus—the gods and goddesses of ancient Greece—as freshly described as if they were alive today.

Mighty Zeus with his fistful of thunderbolts; mischievous little Hermes; grey-eyed Athena, godess of wisdom; Asclepius, the first physician; Orpheus and his beloved Euridice; Helios the sun, crossing the heavens in his fiery chariot. . . these and other equally fabulous figures are featured here with their heroic deeds and petty squabbles illuminated in full dimension.

"For any child fortunate enough to have this generous book . . . the kings and heroes of ancient legend will remain forever matter-of-fact; the pictures interpret the text literally and are full of detail and witty observation."
—The Horn Book

“The drawings . . . are excellent and excitingly evocative.”—The New York Times

INGRI and EDGAR PARIN D’AULAIRE were author-artists of rare distinction. They met in Munich where both were studying art. Ingri had grown up in Norway; Edgar, the son of a noted Italian portrait painter, was born in Switzerland and had lived in Paris and Florence.  Shortly after they married they together began to create text and art for the picture books that established their reputation for unique craftsmanship. During an extended trip to Greece, they studied and sketched the countryside, the people, the architecture, and the artifacts of long ago.  These elements appear with unmistakable authenticity, transformed by the d’Aulaires’ own artistic concepts.
Loading...
or
Not Currently Available for Direct Purchase