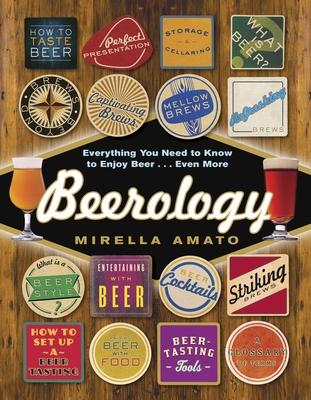 Everything You Need to Know to Enjoy Beer...Even More

If you’ve ever experienced the pleasure of a pint, Beerology is the ultimate guide to exploring, understanding and enjoying the world of beer.

THERE IS a beer for every mood, food and occasion. And, with the growing number of beer festivals popping up worldwide, beer is finally getting the attention and appreciation it deserves. For the average beer lover, the overwhelming choices, brewing styles and traditions can be confusing to say the least. Enter beer specialist Mirella Amato - one of only seven Certified Master Cicerones (beer sommeliers) in the world. With an advanced brewing certificate behind her, readers will be in expert hands as they navigate the multifaceted world of beer, guided by Amato's refreshingly accessible style.

Broken down into fun, easy-to-read chapters, Beerology starts with an introduction to beer and tips on storage and cellaring, then leads into a guide on tasting. Amato presents beer styles in four groups—Refreshing, Mellow, Striking, and Captivating—covering everything from the history and origins of specific brews, to brands that exemplify each type. She then gives tips on hosting beer-tasting parties at home, complete with beer games, and includes a chapter dedicated to beer cocktails (who’s in for a delicious cucumber Pils?). Her original take on pairing beer with food—including chocolate and cheese—is perfect for anyone with an inquisitive mind and an epicurean streak.


Praise For Beerology: Everything You Need to Know to Enjoy Beer...Even More…

“The book itself is a wonderful accumulation of Mirella’s learnings over the years, with the first section going in to the basics, such as the ingredients, storage, presentation, and tasting of beer. The second section features a very handy style guide, with an incredibly intriguing chapter on sour beers that is something I’ve found the general population of beer drinkers should know more about. The third section, “Diving In,” is where you put the knowledge gained from the previous sections to the test, focusing on pairing beer with food, creating beer cocktails, and even hosting your own beer tasting. . . . Beerology is one of the more accessible beer appreciation guides out there, featuring a healthy dose of essential information presented in an easy-to-understand and unpretentious way that is the crux of Mirella’s own teaching style. ”
—Torontoist.com

"The book is easy to read, informative while being fun….This can really help you identify what you enjoy or dislike about particular styles so that you can seek out beers that you are more likely to enjoy....It is also great for someone who is trying to help a less experienced beer drinker explore the world of beer."
- D.C.Füd

"One of the best things about “Beerology” is the way that Amato presents beer styles. Beers are grouped by character — refreshing, mellow, striking, captivating, and brews beyond — giving novice drinkers an easy entree to comprehending the dizzying array of styles being brewed... It’s informative without being overwhelming."
- Star Tribune

"It’s an easy yet captivating read that never feels pretentious or long winded. Amato’s goal seems apparent to me: she wants to get people interested and involved in beer by making it fun, educational, engaging, and just plain interesting."
- Beerism

"She covers such topics as the basics of the brewing process, beer styles, tasting and food pairings with a direct and elucidative style….her chapters on hosting tasting parties and food pairings will make you excited to delve deeper into the world of craft beer."
- L.A. Times

“Mirella Amato is not just a beer educator.  She is a beer evangelist.  Taking a unique approach, she demystifies the appreciation of the entire diverse craft beer spectrum.  Learning about something as joyful and alluring as great beer should be as fun as it is educational and Mirella makes it so."
—Sam Calagione, President and Founder, Dogfish Head Craft Brewery

“Beerology will transform a beer novice into an enlightened beer enthusiast. Better still, it will teach many enthusiasts how to have even more fun with their beer. It's a fine addition to any library. "
—Garrett Oliver, Brewmaster of the Brooklyn Brewery and Editor-in-chief of The Oxford Companion to Beer

“I am a beer zealot. Probably no secret. What may not be widely understood however is the sheer inner joy and peace that one can achieve from this particular type of zealotry. Should you chose to barrel down this path of freedom yourself, or even just wander along it for a spell, this book is a tremendous tool. No longer do we have to be bound by the industrial brewers' chains of oppression. No longer do we have to accept the mediocre! Free yourselves my brothers & sisters with this righteous book of knowledge!”
—Greg Koch, CEO and co-founder of Stone Brewing Co.

Mirella Amato has dedicated herself to promoting local beer and beer appreciation since 2007. She is the first non-US resident to earn the title of Master Cicerone. Mirella is a National Level BJCP judge and has sat on juries for the Canadian Brewing Awards, the Great American Beer Festival, the European Beer Star and the World Beer Cup. She was the recipient of the 2012 OCB Centre of Excellence Industry Choice Award in Food & Beer Matching Development.

Mirella regularly conducts fun and informative guided tastings and food pairing workshops internationally. She also provides staff training and consulting to pubs, restaurants and breweries. She can frequently be heard on CBC Radio and her writing has appeared in a number of beer magazines. Mirella lives in Toronto. This is her first book.