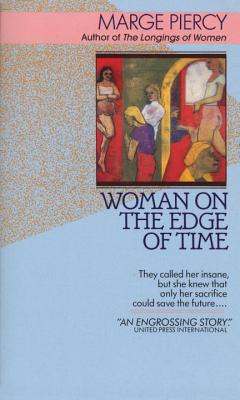 Woman on the Edge of Time

Hailed as a classic of speculative fiction, Marge Piercy's landmark novel is a transformative vision of two futures--and what it takes to will one or the other into reality. Harrowing and prescient, Woman on the Edge of Time speaks to a new generation on whom these choices weigh more heavily than ever before.
Connie Ramos is a Mexican American woman living on the streets of New York. Once ambitious and proud, she has lost her child, her husband, her dignity--and now they want to take her sanity. After being unjustly committed to a mental institution, Connie is contacted by an envoy from the year 2137, who shows her a time of sexual and racial equality, environmental purity, and unprecedented self-actualization. But Connie also bears witness to another potential outcome: a society of grotesque exploitation in which the barrier between person and commodity has finally been eroded. One will become our world. And Connie herself may strike the decisive blow.
Praise for Woman on the Edge of Time

-This is one of those rare novels that leave us different people at the end than we were at the beginning. Whether you are reading Marge Piercy's great work again or for the first time, it will remind you that we are creating the future with every choice we make.---Gloria Steinem
-An ambitious, unusual novel about the possibilities for moral courage in contemporary society.---The Philadelphia Inquirer
-A stunning, even astonishing novel . . . marvelous and compelling.---Publishers Weekly

Marge Piercy has written seventeen novels including the New York Times bestseller Gone to Soldiers, the national bestsellers Braided Lives and The Longings of Women, and the classic Woman on the Edge of Time, as well as He, She and It and Sex Wars; nineteen volumes of poetry including The Hunger Moon: New and Selected Poems 1980-2010, The Crooked Inheritance, and Made in Detroit; and the critically acclaimed memoir Sleeping with Cats. Born in center city Detroit, educated at the University of Michigan and Northwestern, and the recipient of four honorary doctorates, Piercy is active in antiwar, feminist, and environmental causes. From the Trade Paperback edition.
Loading...
or
Not Currently Available for Direct Purchase