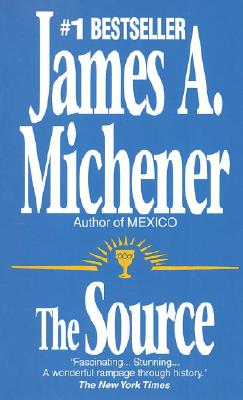 In the grand storytelling style that is his signature, James Michener sweeps us back through time to the very beginnings of the Jewish faith, thousands of years ago. Through the predecessors of four modern men and women, we experience the entire colorful history of the Jews, including the life of the early Hebrews and their persecutions, the impact of Christianity, the Crusades, and the Spanish Inquisition, all the way to the founding of present-day Israel and the Middle-East conflict.
"A sweeping chronology filled with excitement."
THE PHILADELPHIA INQUIRER


Praise For The Source…

“Fascinating . . . stunning . . . [a] wonderful rampage through history . . . Biblical history, as seen through the eyes of a professor who is puzzled, appalled, delighted, enriched and impoverished by the spectacle of a land where all men are archeologists.”—The New York Times

“A sweeping [novel] filled with excitement—pagan ritual, the clash of armies, ancient and modern: the evolving drama of man’s faith.”—The Philadelphia Inquirer

“Magnificent . . . a superlative piece of writing both in scope and technique . . . one of the great books of this generation.”—San Francisco Call Bulletin

James A. Michener was one of the world s most popular writers, the author of more than forty books of fiction and nonfiction, including the Pulitzer Prize winning "Tales of the South Pacific, "the bestselling novels "The Source, Hawaii, Alaska, Chesapeake, Centennial, Texas, Caribbean, "and "Caravans, "and the memoir "The World Is My Home." Michener served on the advisory council to NASA and the International Broadcast Board, which oversees the Voice of America. Among dozens of awards and honors, he received America s highest civilian award, the Presidential Medal of Freedom, in 1977, and an award from the President s Committee on the Arts and Humanities in 1983 for his commitment to art in America. Michener died in 1997 at the age of ninety."
Loading...
or
Not Currently Available for Direct Purchase