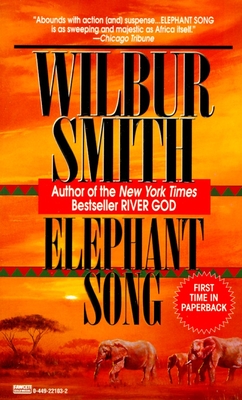 WHITE GOLD
Ivory. In Africa, it is the tragic and thrilling object of greed, corruption, and senseless death. In this dangerous world of poachers and blood money, one determined man and one dedicated woman risk their lives to stop the senseless slaughter of a species on the brink of extinction.
Following a trail that leads from the Mountains of the Moon and the deep forests of central Africa to the secret opulence of Taiwan and London's corridors of power, naturalist Dr. Daniel Armstrong and anthropologist Kelly Kinnear fight the battle of their lives against terrifying adversaries--the powerful individuals and conglomerates who would wipe out an entire race of human beings to satisfy their insatiable lust for elephant's ivory....
"Compelling...Adventure, realism, and suspense are the stuff of Wilbur Smith's books....This story transcends any formula by making its case, passionately, for the human hunger for justice."
--The Christian Science Monitor
"Filled with intrigue and adventure on almost every page...Smith pulls his readers to the edge of their seats....For those who love an exciting adventure novel, this is one that will be difficult to put down."
--Richmond Times-Dispatch

Wilbur Smith was born in Central Africa in 1933. He was educated at Michaelhouse and Rhodes University. After the successful publication of When the Lion Feeds in 1964, he became a full-time writer, and has since written 30 novels, all meticulously researched on his numerous expeditions worldwide. His books have been translated into 26 different languages.
Loading...
or support indie stores by buying on