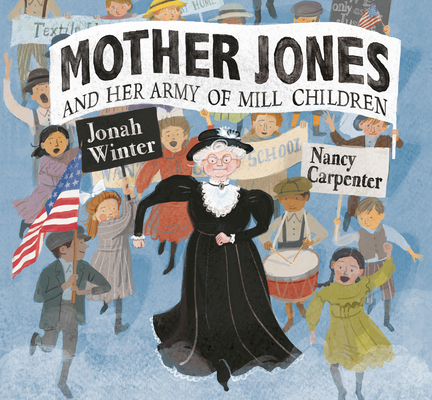 Mother Jones and Her Army of Mill Children

A stunning picture book about Mary "Mother" Jones and the 100 children who marched from Philadelphia to New York in a fiery protest against child labor.

Here's the inspiring story of the woman who raised her voice and fist to protect kids' childhoods and futures-- and changed America forever. Mother Jones is MAD, and she wants you to be MAD TOO, and stand up for what's right! Told in first-person, New York Times bestelling author, Jonah Winter, and acclaimed illustrator, Nancy Carpenter, share the incredible story of Mother Jones, an Irish immigrant who was essential in the fight to create child labor laws. Well into her sixties, Mother Jones had finally had enough of children working long hours in dangerous factory jobs, and decided she was going to do something about it. The powerful protests she organized earned her the name "the most dangerous woman in America." And in the Children's Crusade of 1903, she lead one hundred boys and girls on a glorious march from Philadelphia right to the front door of President Theodore Roosevelt's Long Island home.

Open this beautiful and inspiring picture book to learn more about this feminist icon and how she inspired thousands to make change.

Praise For Mother Jones and Her Army of Mill Children…

Praise for Mother Jones and Her Army of Mill Children:

“Adroitly capture[s] both the grim reality of children at work and the irresistible hope of people coming together to demand change.” —Publishers Weekly

“The theme—that progress is worth fighting for and may not show immediate success—is there for the taking.” —The Horn Book

“An engaging topic for starting discussion of child labor in America’s past and the worldwide child-labor abuses that continue today.”  —The Bulletin

"[A] sly, rollicking picture book bio of Elvis Presley and his rise from mic-shy blond tyke to teen dreamboat with product-infused raven hair who turned his stage-fright trembling into iconic sex appeal" —The Bulletin, starred review

Praise for Nancy Carpenter's A Letter to My Teacher:

Nancy Carpenter is the illustrator of many books for children, including A Letter to My Teacher, by Deborah Hopkinson; Balderdash!: John Newbery and the Boisterous Birth of Children's Books by Michelle Merckel; and Dear Mr. Washington by Lynn Cullen, called "hilarious and bright, with clever attention to detail," by School Library Journal in a starred review. She lives in Brooklyn, New York. You can follow her on Twitter (@NancyCarpentr) and Facebook.
Loading...
or support indie stores by buying on