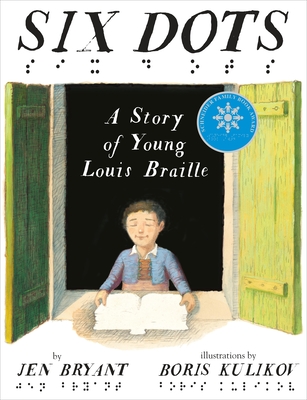 A Story of Young Louis Braille

An inspiring picture-book biography of Louis Braille—a blind boy so determined to read that he invented his own alphabet.

Louis Braille was just five years old when he lost his sight. He was a clever boy, determined to live like everyone else, and what he wanted more than anything was to be able to read.

Even at the school for the blind in Paris, there were no books for him.

And so he invented his own alphabet—a whole new system for writing that could be read by touch. A system so ingenious that it is still used by the blind community today.

Award-winning writer Jen Bryant tells Braille’s inspiring story with a lively and accessible text, filled with the sounds, the smells, and the touch of Louis’s world. Boris Kulikov’s inspired paintings help readers to understand what Louis lost, and what he was determined to gain back through books.

An author’s note and additional resources at the end of the book complement the simple story and offer more information for parents and teachers.

Praise for Six Dots:
"An inspiring look at a child inventor whose drive and intelligence changed to world—for the blind and sighted alike."—Kirkus Reviews

"Even in a crowded field, Bryant’s tightly focused work, cast in the fictionalized voice of Braille himself, is particularly distinguished."—Bulletin, starred review

"This picture book biography strikes a perfect balance between the seriousness of Braille’s life and the exuberance he projected out into the world." — School Library Journal, starred review

Praise For Six Dots: A Story of Young Louis Braille…

"An inspiring look at a child inventor whose drive and intelligence changed to world—for the blind and sighted alike." —Kirkus Reviews

"Although many Braille biographies stress his disability, Bryant’s title subtly emphasizes his creativity and celebrates him as an inventor, making this an excellent addition for STEM collections. Illustrations in Kulikov’s signature style, light-hearted with a touch of tartness, deftly toggle between sun-washed scenes in which the world views Louis and blackened scenes in which Louis recreates the world he sees in his mind."—The Bulletin of the Center for Children’s Books, starred review

"The focus on Braille as one of the world’s great inventors is apt, and by taking a close look at his childhood, his family, and his experiences as a young person, Bryant makes Braille’s story even more powerful." —School Library Journal, starred review

"Bryant’s portrayal captures Louis’s intelligence, determination, and tenacious desire for access to the written word.  As Bryant states, “The name Braille deserves to be on everyone’s list of great inventors,” and this book ably demonstrates why."--The Horn Book Magazine

"Readers will be floored by the sheer tenacity of Louis Braille." -- Shelf Awareness

Jen Bryant has published poetry, biographies, picture books, and fiction for young readers. Her picture-book-biography collaborations with Melissa Sweet—A River of Words: The Story of William Carlos Williams, The Right Word: Roget and His Thesaurus, and A Splash of Red: The Life and Art of Horace Pippin—have all won multiple awards. Jen lives with her family in southeastern Pennsylvania. You can read more about her at JenBryant.com.

Boris Kulikov graduated from the Institute of Theatre, Music and Cinema in St. Petersburg, Russia. Since 1997 he’s been living and working as an illustrator in Brooklyn, New York. His many acclaimed books include Papa’s Mechanical Fish by Candace Fleming, a School Library Journal Best Book of the Year, and the Max books (Max’s Words, Max’s Castle, Max’s Dragon, Max’s Math) by Kate Banks. You can find him at BorisKulikov.com.
Loading...
or support indie stores by buying on
(This book is on backorder)