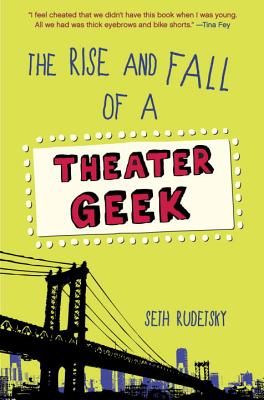 The Rise and Fall of a Theater Geek

Broadway, New York. The shows, the neon lights . . . the cute chorus boys! It's where Justin has always wanted to be--and now, with a winter internship for a famous actor, he finally has his chance to shine. If only he could ditch his kind, virtuous, upright, and--dare he say it?—uptight boyfriend, Spencer. But once the internship begins, Justin has more to worry about than a cramped single-guy-in-the-city style. Instead of having his moment in the spotlight, he's a not-so-glorified errand boy. Plus, Spencer is hanging out with a celebra-hottie, Justin's best friend Becky isn't speaking to him, and his famous actor boss seems headed for flopdom. Justin's tap-dancing as fast as he can, but all his wit and sass might not be enough to switch his time in New York from nightmare-terrible to dream-come-true terrific.

Seth Rudetsky's second YA novel is endearingly human, laugh-out-loud funny, and for any kid who's ever aspired to Broadway but can only sneak in through the stage door.

SETH RUDETSKY is the Broadway host, seven days a week, on Sirius Satellite Radio. As a pianist, Seth has played for more than a dozen Broadway shows including Ragtime, Les Miz, and Phantom. He was the artistic producer and music director for the first five annual Actors Fund Fall Concerts, including Dreamgirls with Audra MacDonald and Hair with Jennifer Hudson. In 2007 he made his Broadway acting debut in The Ritz and has also appeared on TV in Law & Order, Criminal Intent.  As an author, he penned the books The Q Guide to Broadway, now in its third printing, and the recently published Broadway Nights, which was just released as an audio book on audible.com and featuring the voices of Andrea Martin, Jonathan Groff, and Kristin Chenoweth. He currently writes a weekly column on Playbill.com.
Loading...
or support indie stores by buying on