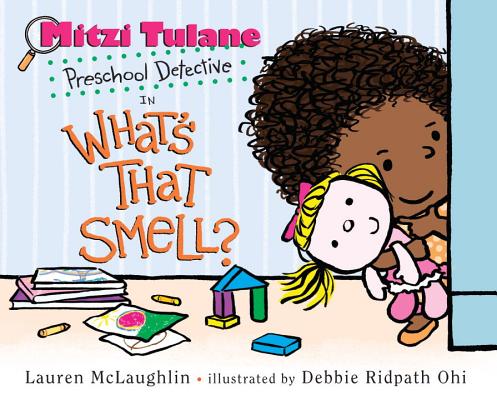 Mitzi Tulane may be only three years old, but she sure knows how to follow a trail of evidence and solve tough mysteries. From the strange happenings in the kitchen to the sudden arrival of every family member she’s ever met, Mitzi pieces together the clues and (finally) realizes that she’s . . . in the middle of her own surprise birthday party!

Kids and parents will laugh along as Mitzi sorts through not-so-subtle hints and comes to her conclusions. Readers will love figuring out the surprise ahead of the private-eye protagonist! Debbie Ridpath Ohi’s bouncy illustrations bring an extra layer of fun to Lauren McLaughlin’s clever story.

LAUREN McLAUGHLIN grew up in the small town of Wenham, Massachusetts. After college and a brief flirtation with anthropology, she spent ten years as a screenwriter and movie producer before turning her attention to writing novels and picture books.

DEBBIE RIDPATH OHI is a writer and illustrator based in Toronto. She began her career as a computer programmer and analyst, but has since focused on writing and illustrating books for young people. She is the illustrator of Michael Ian Black’s picture books I’m Bored and Naked!

Praise For Mitzi Tulane, Preschool Detective in What's That Smell?…

".. a sweet story centering on a bright, black birthday girl, and on that front it takes the cake."

"Young detectives everywhere will love following along with Mitzi as she uncovers clue after clue that something is up at 123 Maple Street, until the very end, when she is surprised by the best birthday party in all her four years. This brightly illustrated story will be fun for young listeners as they try to guess what is happening. Will they figure it out before Mitzi does? The protagonist is brown-skinned, and her parents, doll, and little brother are white. The scenes of their relatives and friends are equally diverse and reinforce the subtle lesson that people and families come in all shapes, sizes, and colors. VERDICT Mitzi Tulane is a character whom children will enjoy meeting, and they will look forward to her future adventures." — School Library Journal
or
Not Currently Available for Direct Purchase
Copyright © 2020 American Booksellers Association