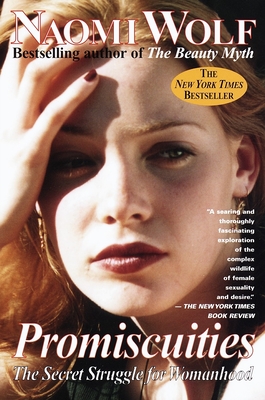 The Secret Struggle for Womanhood

In this provocative and highly personal book, bestselling author Naomi Wolf explores a subject that has long been taboo in our society: women's sexual coming-of-age. Promiscuities brazenly exposes the truths behind the conflicting messages directed at young women during and after the sexual revolution. Drawing on surprising examples from the ancient and recent past, along with vivid recollections of her own youth, Wolf shows how our "liberated" culture still fears and distorts female passion. She also shares fascinating true stories that illustrate the fantasies and sometimes crippling realities women pass through on their way toward erotic and emotional discovery. A landmark book, Promiscuities is a call to women of all ages to reclaim and celebrate their sexuality.

Praise For Promiscuities: The Secret Struggle for Womanhood…

"At last, a new generation of women writers is addressing the powerful issues of female sexuality. I gulped this wonderful book down in one sitting, like a novel. Brava Naomi Wolf for your courage, your intelligence, your lucid prose." - Erica Jong

"Refreshing ... highly evocative ... Wolf does two important things very well: reminding readers her own age what it felt like to be a teenage girl, and providing a crash course on the wildly varying cultural meanings attached to female sexuality throughout history." - The Ottawa Citizen

"Naomi Wolf [is] the best writer about women and sexuality that we have." - Toronto Sun

Naomi Wolf's first book, The Beauty Myth, was published in 14 countries (over 70,000 copies in paperback sold in Canada to date) and is an international bestseller. Her second book, Fire with Fire, was also well received by critics and readers alike. Wolf has appeared on many national talk shows and speaks to college audiences across Canada and the United States on the topic of young women and feminism.
Loading...
or support indie stores by buying on