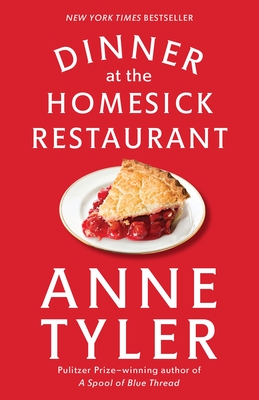 Dinner at the Homesick Restaurant

A “funny, heart-hammering, wise” (The New York Times) best-selling portrait of a family that will remind you why "to read a novel by Anne Tyler is to fall in love" (PEOPLE).

Abandoned by her wanderlusting husband, stoic Pearl raised her three children on her own. Now grown, the siblings are inextricably linked by their memories—some painful—which hold them together despite their differences.

Hardened by life’s disappointments, wealthy, charismatic Cody has turned cruel and envious. Thrice-married Jenny is errant and passionate. And Ezra, the flawed saint of the family, who stayed at home to look after his mother, runs a restaurant where he cooks what other people are homesick for, stubbornly yearning for the perfect family he never had.

Now gathered during a time of loss, they will reluctantly unlock the shared secrets of their past and discover if what binds them together is stronger than what tears them apart.

“[In Dinner at the Homesick Restaurant Tyler] has arrived at a new level of power.” —John Updike, The New Yorker

“Marvelous, astringent, hilarious, [and] strewn with the banana peels of love.” —Cosmopolitan

Praise For Dinner at the Homesick Restaurant: A Novel…

“A book that should join those few that every literate person will have to read.”—The Boston Globe

“A novelist who knows what a proper story is . . . [Tyler is] not only a good and artful writer, but a wise one as well.”—Newsweek

“Anne Tyler is surely one of the most satisfying novelists working in America today.”—Chicago Tribune

“In her ninth novel she has arrived at a new level of power.”—John Updike, The New Yorker

“Marvelous, astringent, hilarious, [and] strewn with the banana peels of love.”—Cosmopolitan

ANNE TYLER is the author of more than twenty novels. Her eleventh novel, Breathing Lessons, was awarded the Pulitzer Prize in 1988. She is a member of the American Academy of Arts and Letters. She lives in Baltimore, Maryland.
Loading...
or support indie stores by buying on