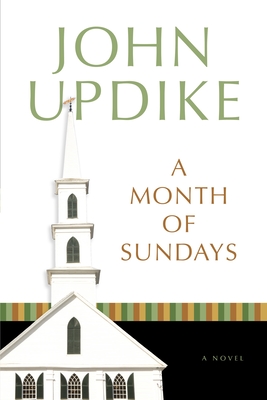 A Month of Sundays (Paperback)

In this antic riff on Hawthorne’s Scarlet Letter, the Reverend Tom Marshfield, a latter-day Arthur Dimmesdale, is sent west from his Midwestern parish in sexual disgrace. At a desert retreat dedicated to rest, recreation, and spiritual renewal, this fortyish serial fornicator is required to keep a journal whose thirty-one weekly entries constitute the book you now hold in your hand. In his wonderfully overwrought style he lays bare his soul and his past—his marriage to the daughter of his ethics professor, his affair with his organist, his antipathetic conversations with his senile father and his bisexual curate, his golf scores, his poker hands, his Biblical exegeses, and his smoldering desire for the directress of the retreat, the impregnable Ms. Prynne. A testament for our times.

Praise For A Month of Sundays: A Novel…

“John Updike may be America’s finest novelist and [A Month of Sundays] is quintessential Updike.”—The Washington Post

“The funniest book that anyone is likely to read in, well, a month of Sundays . . . an excellent novel . . . Updike is dazzling in his wordplay.”—The Cleveland Press