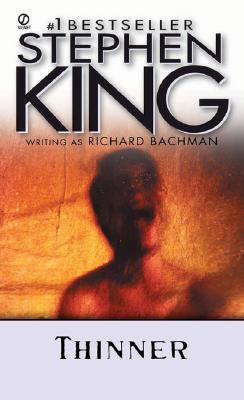 Curse of the Old Gypsy Man...
Billy Halleck, good husband, loving father, is both beneficiary and victim of the American Good Life: he has an expensive home, a nice family, and a rewarding career as a lawyer. But he is also fifty pounds overweight and, as his doctor keeps reminding him, heading into heart attack country.
Then, in a moment of carelessness, Billy sideswipes an old gypsy woman as she is crossing the street--and her ancient father passes a bizarre and terrible judgment on him.
-Thinner, - the old gypsy man whispers, and caresses his cheeks like a lover. Just one word...but six weeks later and ninety-three pounds lighter, Billy Halleck is more than worried. He's terrified. And desperate enough for one last gamble...that will lead him to a nightmare showdown with the forces of evil melting his flesh away.

“Pulsating with evil…will have you on the edge of your seat.”—Publishers Weekly

Stephen King lives in Maine and Florida with his wife, novelist Tabitha King. He has written more than forty books and two hundred short stories. He has won the World Fantasy Award, several Bram Stoker awards, and the O. Henry Award for his story -The Man in the Black Suit, - and is the 2003 recipient of The National Book Foundation Medal for Distinguished Contribution to American Letters.
Loading...
or
Not Currently Available for Direct Purchase