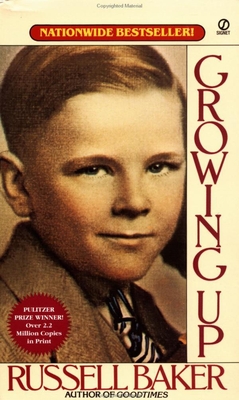 Russell Baker’s Pulitzer Prize-winning autobiography about growing up in America during the Great Depression.

“Magical….He has taken such raw, potentially wrenching material and made of it a story so warm, so likable, and so disarmingly funny…a work of original biographical art.”—The New York Times

In this heartfelt memoir, groundbreaking Pulitzer-winning New York Times columnist Russell Baker traces his youth from the backwoods mountains of Virginia to a New Jersey commuter town to the Depression-shadowed landscape of Baltimore.

His is a story of adversity and courage, the poignancy of love and the awkwardness of sex, of family bonds and family tensions. We meet the people who influenced Baker’s early life: his strong and loving mother, his bold little sister Doris, the awesome matriarch Ida Rebecca and her twelve sons. Here, too, are schoolyard bullies, great teachers, and the everyday heroes and heroines of the Depression who faced disaster with good cheer as they tried to muddle through.

A modern day classic filled with perfect turns of phrase and traces of quiet wisdom, Growing Up is a coming of age story that is “the stuff of American legend” (The Washington Post Book World).

Praise For Growing Up…

Praise for Growing Up and Russell Baker

“Lovely haunting prose....[Baker] moves beyond the boundaries of his newspaper column to establish a place for this book among the most enduring recollections of American boyhoods—those of Thurber and Mencken, Aldrich and Twain.”—The Washington Post Book World

“One of the most heart-warming, inspiring, nostalgic, funniest, best-written books I have ever read.”—Ann Landers

“The saddest, funniest, most tragical yet comical picture of coming of age in the U.S.A. in the Depression years and World War II that has ever been written.”—Harrison Salisbury

Russell Baker charmed readers with his astute political commentary and biting cerebral wit. The noted journalist, humorist, essayist, and biographer wrote or edited seventeen books, and was the author of the nationally syndicated “Observer” column for the New York Times from 1962 to 1998. Called by Robert Sherrill of the Washington Post Book Word, “the supreme satirist of this half-century,” Baker was most famous for turning the daily gossip of most newspapers into the stuff of laugh-out-loud literature. John Skow of Time described Baker's work as “funny, but full of the pain and absurdity of the age...he can write with a hunting strain of melancholy, with delight, or...with shame or outrage.” Baker received his first Pulitzer Prize for distinguished commentary in 1979, in recognition of his "Observer" column. Baker received his second Pulitzer Prize in 1983 for his autobiography, Growing Up (1983).

In addition to his regular column and numerous books, Baker also edited the anthologies, The Norton Book of Light Verse (1986) and Russell Baker's Book of American Humor (1993). From 1993 to 2004 he was the regular host of the PBS television series Masterpiece Theatre. Baker was a regular contributor to national periodicals such as The New York Times Magazine, Sports Illustrated, Saturday Evening Post, and McCalls. One of his columns, “How to Hypnotize Yourself into Forgetting the Vietnam War,” was dramatized and filmed by Eli Wallach for PBS. Baker died in 2019 at the age of 93.
Loading...
or support indie stores by buying on
(This book is on backorder)