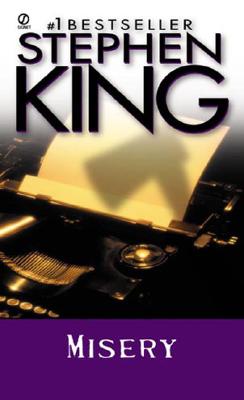 Paul Sheldon. He's a bestselling novelist who has finally met his biggest fan. Her name is Annie Wilkes and she is more than a rabid reader--she is Paul's nurse, tending his shattered body after an automobile accident. But she is also his captor, keeping him prisoner in her isolated house.
Now Annie wants Paul to write his greatest work--just for her. She has a lot of ways to spur him on. One is a needle. Another is an ax. And if they don't work, she can get really nasty.

“Solid character delineation and terrifying insight. In addition to being able to scare the reader breathless, King says a tremendous amount about writing itself. We delight in his virtuosity.”—The Washington Post

“Truly gripping…some of the best writing King has ever done…the master has returned with a vengeance.”—Publishers Weekly

Stephen King lives in Maine and Florida with his wife, novelist Tabitha King. He has written more than forty books and two hundred short stories. He has won the World Fantasy Award, several Bram Stoker awards, and the O. Henry Award for his story -The Man in the Black Suit, - and is the 2003 recipient of The National Book Foundation Medal for Distinguished Contribution to American Letters.
Loading...
or
Not Currently Available for Direct Purchase