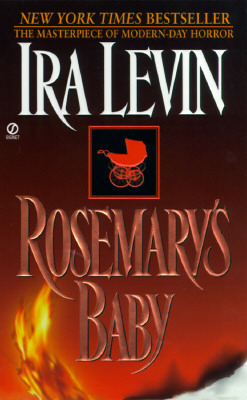 She is a housewife—young, healthy, blissfully happy. He is an actor—charismatic and ambitious. The spacious, sun-filled apartment on Manhattan's Upper West Side is their dream home—a dream that turns into an unspeakable nightmare. . . .

Enter the chilling world of Ira Levin—where terror is as near as your new neighbors . . . and where evil wears the most innocent face of all. . . .

"Suspense is beautifully intertwined with everyday incidents; the delicate line between belief and disbelief is faultlessly drawn."
—New York Times

"A darkly brilliant tale of modern deviltry that induces the reader to believe the unbelievable. I believed it and was altogether enthralled."
—Truman Capote

"Impossible to put down. . . . Ever so subtly Levin has stripped his audience of their rational defenses and holds them in his clutches . . . the climax is an icy shock which no one will ever forget."
—Providence Journal

Ira Levin is the "New York Times" bestselling author of "Rosemary's Baby," "The Stepford Wives," "The Boys from Brazil," "A Kiss Before Dying," and "Sliver," each of which was made into a major motion picture. He also wrote ?Deathtrap, ? the longest running thriller in Broadway history, and has won two Edgar Allan Poe awards. He lives in New York City.
Loading...
or
Not Currently Available for Direct Purchase