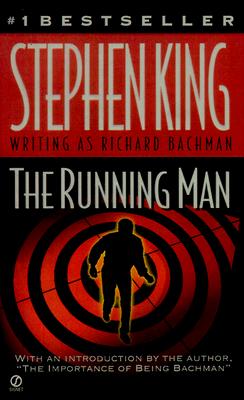 In the year 2025, the best men don t run for President, they run for their lives .
Ben Richards is out of work and out of luck. His eighteen-month-old daughter is sick, and neither Ben nor his wife can afford to take her to a doctor. For a man with no cash and no hope from the poor side of town, there's only one thing to do: become a contestant on one of the Network's Games, shows where you can win more money than you ve ever dreamed of or die trying. Now, Ben's going prime-time on the Network's highest-rated viewer participation show. And he's about to become prey for the masses .
With an introduction by the author, The Importance of Being Bachman


Praise For The Running Man…

“Under any name King mesmerizes the reader.”—Chicago Sun-Times

Stephen King lives in Maine and Florida with his wife, novelist Tabitha King. He has written more than forty books and two hundred short stories. He has won the World Fantasy Award, several Bram Stoker awards, and the O. Henry Award for his story The Man in the Black Suit, and is the 2003 recipient of The National Book Foundation Medal for Distinguished Contribution to American Letters."
Loading...
or
Not Currently Available for Direct Purchase