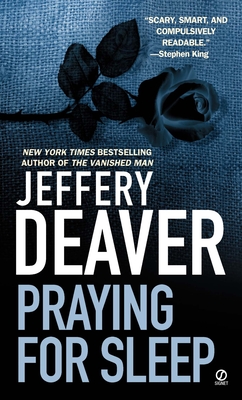 From the New York Times bestselling author of The Never Game and the Lincoln Rhyme novels comes a twisty psychological thriller packed into a terrifying 24 hours...

When paranoid schizophrenic killer Michael Hrubek escapes from an institution, there’s no doubt of where he’s headed: to find the woman who put him away and to finally get his revenge.

Lis Atcheson knows he’s out there—the man who killed two of her students. He’s haunted every sleepless night ever since she testified against him. Now the nightmares are coming true. He’s watching... and waiting... and he’s going to take Lis to hell with him.

With a massive storm coming—in more ways than one—Lis can barely prepare for the dark cloud that approaches, threatening to take everything away from her in one horrifying sweep...

Praise For Praying for Sleep…

Jeffery Deaver is the New York Times bestselling author of nineteen suspense novels, including The Blue Nowhere and The Bone Collector, which was made into a feature film starring Denzel Washington and Angelina Jolie. He has been nominated for three Edgar Awards from the Mystery Writers of America and is a two-time recipient of the Ellery Queen Readers Award for Best Short Story of the Year. A lawyer who quit practicing to write full-time, he lives in California and Virginia.
Loading...
or support indie stores by buying on
(This book is on backorder)