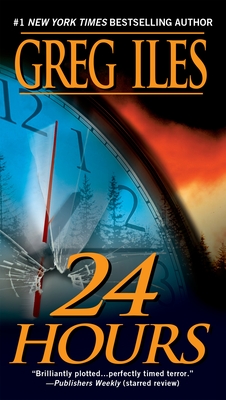 #1 New York Times bestselling author Greg Iles takes readers on a daringly executed roller-coaster ride as a family under attack takes justice into their own hands.

It begins on a perfect night, with a perfect family about to be trapped in a perfect crime...

Will Jennings is a successful young doctor in Jackson, Mississippi, with a thriving practice, a beautiful wife, and a five-year-old daughter he loves beyond measure. But Will and his family are being watched by a con man and psychopath who may be a genius. A man who has never been caught and whose victims have never talked to the police. A man whose life's work strikes at the heart of every family's unspoken fear: the unstoppable kidnapping.

But this time he's picked the wrong family to terrorize. Because Will and Karen Jennings aren't going to watch helplessly as he victimizes them. They aren't going to let him get away with it. They're going to fight back...

Praise For 24 Hours: A Suspense Thriller…

“Iles displays all the well-honed chops that have made him a bestselling author...He Achieves a near perfect balance of high-tech inventiveness and characterization as the plot rushes to its grand—and violent—finale....Inventive and fast-paced.”—Times-Picayune

“A chilling tale...calculated to jangle the reader's every nerve...gut-wrenching.”—Library Journal

“A taut tale, terrifying in its intensity, compelling in its pace...A good, old-fashioned thriller, the likes of which are rare...A winner.”—Chattanooga Times