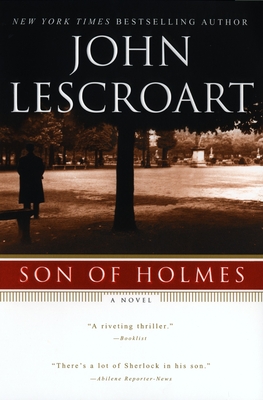 They say he is the son of Sherlock Holmes...The author of The Fall and the Dismas Hardy and Wyatt Hunt series takes us to a small French town in the dark days of World War I.

The “reliably excellent”* New York Times bestselling author offers an engrossing historical mystery in which the rumor is that young chef Auguste Lupa is the son of the greatest detective of all time. And his mysterious legacy may come to light as he attempts to solve the baffling murder of an intelligence agent…


Praise For Son of Holmes (An Auguste Lupa Novel)…

“Grisham and Turow remain the two best-known writers in the genre. There is, however, a third novelist at work today who deserves to be considered alongside Turow and Grisham. His name is John Lescroart.”—Chicago Sun-Times

“A gifted writer….I read him with great pleasure.”—Richard North Patterson

John Lescroart is the New York Times bestselling author of numerous legal thrillers and mysteries, most of them set in contemporary San Francisco. Among his novels are The Fall, The Keeper, The Ophelia Cut, The Hunt Club,  The Second Chair, The First Law, Nothing But the Truth, and Dead Irish, as well as two novels featuring Auguste Lupa, the reputed son of Sherlock Holmes.
Loading...
or
Not Currently Available for Direct Purchase