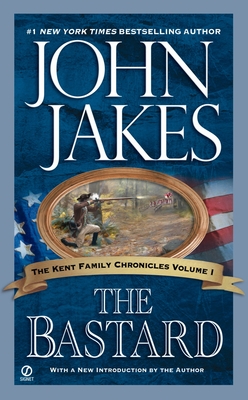 Praised by Patricia Cornwell as “the best historical novelist of our time,” John Jakes began his bestselling career with this vibrant novel of romance and adventure. The Bastard begins the enduring eight-volume saga of the Kent family, and their participation in the events that shaped a nation…

The illegitimate son of the Duke of Kentland, Phillipe Charboneau has been denied his birthright by his father’s family. So he flees to London where he learns the printing trade…but his journey truly begins when he falls under the influence of a man named Benjamin Franklin and travels to America. Changing his name to Philip Kent, he finds work at a printing house, and discovers the radical writings of Sam Adams. He has a new identity and a new passion. And soon he will become a soldier, fighting alongside the colonists in a turbulent adventure that would be called the Revolutionary War...

John Jakes is the bestselling author of Charleston, the Kent Family Chronicles, the North and South trilogy, On Secret Service, California Gold, Homeland, and American Dreams. Descended from a soldier of the Virginia Continental Line who fought in the American Revolution, Jakes is one of today’s most distinguished authors of historical fiction.
Loading...
or support indie stores by buying on