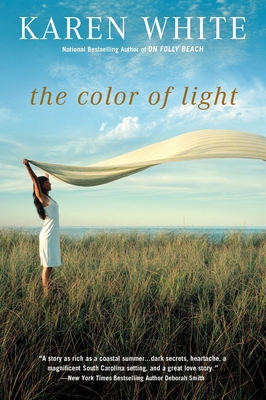 The Color of Light

An emotionally moving novel of a woman in search of a new beginning and a man haunted by the past—from the New York Times bestselling author of the Tradd Street novels.

At thirty-two, Jillian Parrish finally finds the courage to put herself in the driver’s seat of her life.  Pregnant and recently divorced, she and her seven-year-old daughter find refuge and solace on Pawleys Island, South Carolina—Jillian’s only source of happy childhood memories. Summers spent at her grandmother’s beach house had been Jillian’s sanctuary from indifferent parents—until her best friend Lauren Mills disappeared, never to be found.

Linc Rising, Lauren’s boyfriend and Jillian’s confidant, had been a suspect in Lauren’s disappearance. Jillian had never doubted his innocence—but because her parents had whisked her back home to Atlanta, she never got a chance to tell him. Now, a resentful Linc is back on Pawleys Island—renovating the old Mills house. And as ghosts of the past are resurrected, and as Jillian’s daughter begins having eerie conversations with an imaginary friend named Lauren, Jillian and Linc will uncover the truth about Lauren’s disappearance and about the feelings they have buried for sixteen years...

Praise For The Color of Light…

“An engaging read with a delicious taste of the mysterious.”—New York Times bestselling author Haywood Smith

“White’s dizzying carousel of a plot keeps those pages turning, so much so that the book can [be]—and should be—finished in one afternoon, interrupted only by a glass of sweet iced tea.”—Oprah.com

“White captures the true essence of Charleston by intertwining the sights and smells of the historic town with an enchanting story filled with ghostly spirits, love, and forgiveness…a once-in-a-lifetime series.”—Fresh Fiction

“This is storytelling of the highest order: the kind of book that leaves you both deeply satisfied and aching for more.”—Beatriz Williams, New York Times bestselling author of Tiny Little Thing