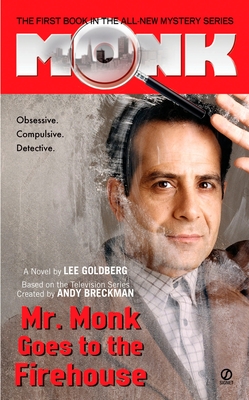 Mr. Monk Goes to the Firehouse

Monk's house is being fumigated, and he has nowhere to go. Fortunately, his assistant Natalie and her daughter are kind enough to welcome him into their home. Unfortunately, their home is not quite up to Monk's standards of cleanliness and order.

But while Monk attempts to arrange his surroundings just so, something else needs to be put straight. The death of a dog at the local firehouse-on the same night as a fatal house fire-has led Monk into a puzzling mystery. And much to his horror, he's going to have to dig through a lot of dirt to find the answer.

Lee Goldberg has written episodes for the Monk television series, as well as many other programs. He is a two-time Edgar Award nominee and the author of the acclaimed Diagnosis Murder novels, based on the TV series for which he was a writer and executive producer.
Loading...
or support indie stores by buying on
(This book is on backorder)