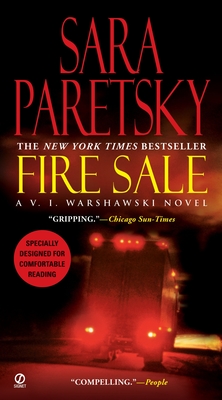 “Takes off with a bang—literally...V. I. remains a paragon among PIs, and Fire Sale is one of Paretsky’s best books yet.”—St. Louis Post-Dispatch

A conscience can weigh a PI down more than the heaviest firearm—and get her into more trouble too. It’s that nagging conscience that makes V. I. Warshawski agree to fill in as coach for the girls’ basketball team at her South Chicago alma mater—which in turn leads her to the headquarters of By-Smart, the global retail empire where V. I. hopes to get some desperately needed funds for the struggling squad.

But conscience seems to be in short supply at By-Smart...with the exception of Billy Bysen, the earnest teenage grandson of the chain’s gruff, tightfisted founder. And when Billy disappears—along with a mysterious document much desired by By-Smart’s management team—V. I. is hurled onto a twisted, body-strewn path that runs through Chicago’s dirtiest places and reveals some of its dirtiest secrets...

“Takes off with a bang—literally...V. I. remains a paragon among PIs, and Fire Sale is one of Paretsky’s best books yet.”—St. Louis Post-Dispatch

“While V. I. Warshawski may be older and even wiser, she’s lost none of her trademark wit or moral indignation.”—Chicago Tribune

“A compelling case. Snappy and satisfying, as always.”—People

Sara Paretsky is the New York Times bestselling author of the renowned V.I. Warshawski novels. Her many awards include the Cartier Diamond Dagger Lifetime Achievement Award from the British Crime Writers' Association and the 2011 Mystery Writers of America's Grand Master Award. She lives in Chicago.
Loading...
or support indie stores by buying on
(This book is on backorder)