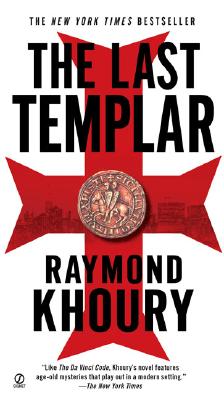 The Last Templar (A Templar Novel #1)

In 1291, a young Templar knight flees the fallen holy land in a hail of fire and flashing sword, setting out to sea with a mysterious chest entrusted to him by the Order's dying grand master. The ship vanishes without a trace.

In present day Manhattan, four masked horsemen dressed as Templar Knights stage a bloody raid on the Metropolitan Museum of Art during an exhibit of Vatican treasures. Emerging with a strange geared device, they disappear into the night.

The investigation that follows draws archaeologist Tess Chaykin and FBI agent Sean Reilly into the dark, hidden history of the crusading knights—and into a deadly game of cat and mouse with ruthless killers—as they race across three continents to recover the lost secret of the Templars.

Praise For The Last Templar (A Templar Novel #1)…

Praise for The Last Templar

“Like The Da Vinci Code, Khoury’s novel features age-old mysteries that play out in a modern setting.”—The New York Times

“One of the most gripping opening scenes among recent thrillers...[The] story is nothing if not cinematic, as it skips across three continents and climaxes with a storm at sea of biblical proportions.”—Booklist

“[Will] satisfy your historical thriller craving.”—Glamour

Raymond Khoury is the New York Times bestselling author of The Last Templar, The Sanctuary, The Sign, The Templar Salvation, The Devil’s Elixir, Rasputin's Shadow, and The End Game. His novels have been translated into more than forty languages and, in the case of The Last Templar, adapted into a comic book and an NBC television miniseries. An acclaimed screenwriter and producer for both television and film, he has also penned several scripts for BBC series such as Spooks and Waking the Dead.
Loading...
or support indie stores by buying on