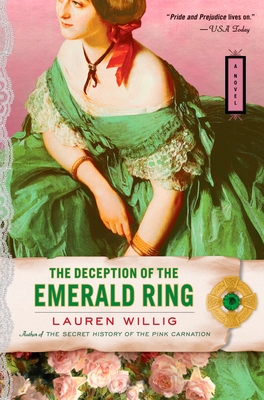 The Deception of the Emerald Ring (Pink Carnation #3)

Harvard grad student Eloise Kelly has gotten into quite a bit of trouble since she started spying on the Pink Carnation and the Black Tulip-two of the deadliest spies to saunter the streets of nineteenth-century England and France.

Not only has she unearthed secrets that will rearrange history, she's dallied with Colin Selwick and sought out a romantic adventure all her own. Little does she know that she's about to uncover another fierce heroine running headlong into history...

In June 1803, Letty Alsworthy attempts to prevent her sister’s midnight elopement—only to be accidentally whisked away herself. The scandal forces her into a hasty marriage with Geoffrey Pinchingdale-Snipe, who then decamps immediately to help the Pink Carnation quash a ring of Irish rebels led by the Black Tulip. Not to be outdone, Letty steals away to the Emerald Isle herself, ready to learn a thing or two about espionage—and never imagining she might learn a few things about love along the way.

Praise For The Deception of the Emerald Ring (Pink Carnation #3)…

Praise for The Deception of the Emerald Ring

More Praise for the Novels of Lauren Willig

Lauren Willig is the author of the New York Times bestselling Pink Carnation series and a RITA Award-winner for Best Regency Historical for The Mischief of the Mistletoe. A graduate of Yale University, she has a graduate degree in English history from Harvard and a J.D. from Harvard Law School. She lives in New York City, where she now writes full time.
Loading...
or support indie stores by buying on
(This book is on backorder)