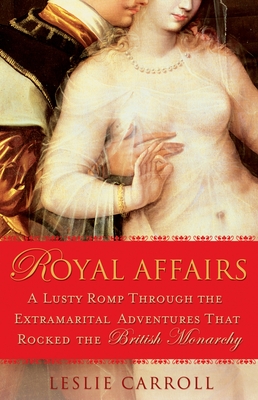 A funny, raucous, and delightfully dirty history of 1,000 years of bedroom-hopping secrets and scandals of Britain's royals.

Insatiable kings, lecherous queens, kissing cousins, and wanton consorts-history has never been so much fun.

Royal unions have always been the stuff of scintillating gossip, from the passionate Plantagenets to Henry VIII's alarming head count of wives and mistresses, to the Sapphic crushes of Mary and Anne Stuart right on up through the scandal-blighted coupling of Prince Charles and Princess Diana. Thrown into loveless, arranged marriages for political and economic gain, many royals were driven to indulge their pleasures outside the marital bed, engaging in delicious flirtations, lurid love letters, and rampant sex with voluptuous and willing partners.

This nearly pathological lust made for some of the most titillating scandals in Great Britain's history. Hardly harmless, these affairs have disrupted dynastic alliances, endangered lives, and most of all, fed the salacious curiosity of the public for centuries. Royal Affairs will satiate that curiosity by bringing this arousing history alive.