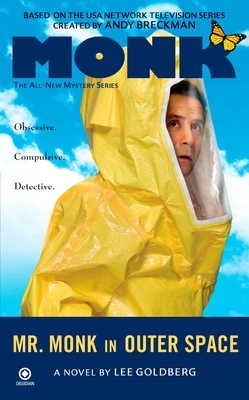 At a convention for the cult science fiction show Beyond Earth, Adrian Monk meets fans as obsessive-compulsive as he is. Though he’s not preoccupied with the program, Monk can understand the phenomenon. Who wouldn’t want to live in an imaginary world?

But there may be a killer in the Beyond Earth community: Someone in a starship uniform has gunned down the show’s legendary creator. Could a fan be that furious at him for selling out to Hollywood? Or is more going on behind the scenes?

Luckily, Monk’s agoraphobic brother, Ambrose, is an expert on the TV series, and together they’ll search the earth and beyond for the murderer. That is, if Ambrose can bring himself to leave the house. A new story starring Adrian Monk by Edgar® Award-nominated screenwriter Lee Goldberg. It’s compulsive, page-turning fun.

“Even if you aren’t familiar with the TV series Monk, this book is too funny to not be read.”—The Weekly Journal