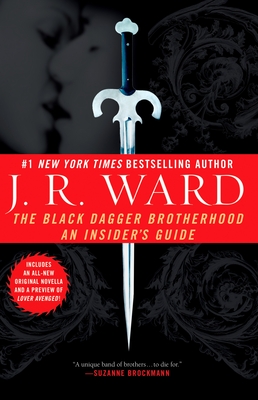 This is a book no Black Dagger Brotherhood fan should miss—an insider’s guide that will seduce readers as powerfully as the sexy band of Brothers and the world they live in. And also included is an original short story about stars Zsadist and Bella!

This comprehensive guide features insider information on the Brotherhood, their dossiers, stats, and special gifts. Readers will savor interviews with their favorite characters, deleted scenes, exciting material from the J.R. Ward message board and the answers to their burning questions. They’ll learn what it’s like for J.R. Ward to write each installment of the series, and in a fascinating twist, read an interview with the author—conducted by the Brothers. Plus readers will get a sneak peek at the much anticipated next book in the Black Dagger Brotherhood series, Lover Avenged.

J. R. Ward is the author of more than thirty novels, including those in her #1 New York Times bestselling Black Dagger Brotherhood series. She is also the author of the Black Dagger Legacy series and the Bourbon Kings series. There are more than fifteen million copies of her novels in print worldwide, and they have been published in twenty-six different countries around the world. She lives in the South with her family.
or
Not Currently Available for Direct Purchase
Copyright © 2020 American Booksellers Association